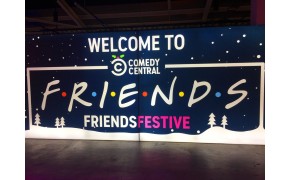 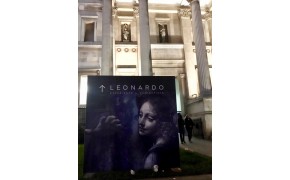 Leonardo Experience a Masterpiece exhibition. The Virgin of the Rocks at the National Gallery in Lon.. 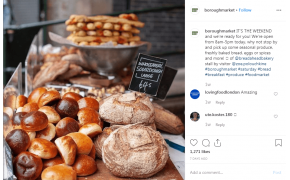 13 Markets to visit in London

Discover some of the best markets in London... 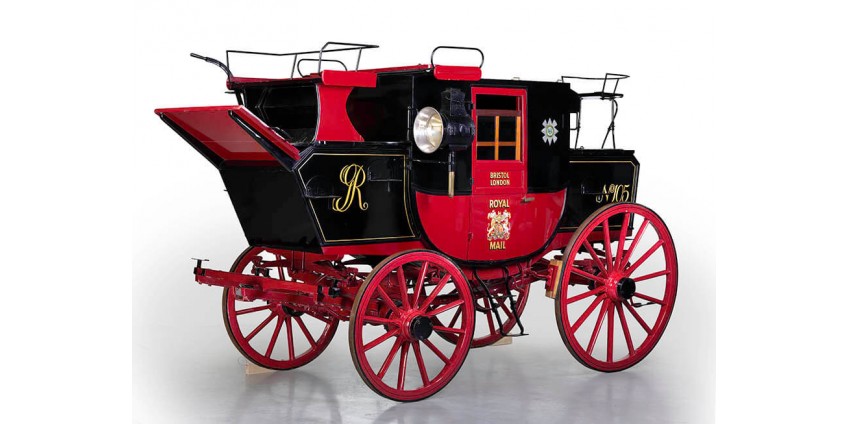 How many times you found yourself waiting impatiently in a queue to drop off a letter or a parcel at the local post office? Nowadays in a such fast paced society we seem to have less and less patience when it comes to waiting. Waiting is most of the times a trigger for anger and discomfort. Some start arguing, moaning and show their discontent, like those 3 minutes in the queue would mean hours of their lifetime.

While I was walking in Baker Street I passed by the local Royal Mail post office to drop off a parcel. I’ve been here so many times before and mostly at rush hour, but this time it was different. I didn’t have my phone with me to keep me busy. That’s when I was forced to just look around and observe. And wait. I could see the machines scanning, piles of letters and parcels being sorted and dropped off and that’s when I decided to read and find out a bit more about The Royal Mail’s 500 years of history.
I was really curios to see their evolution and how the big picture looked like, as we sometimes take things for granted forgetting the hard work, dedication and sacrifices of past generations, who have made our present more comfortable.

I think that from time to time it is good to ask ourselves: “How did we get here?”

Without the progression of mail maybe our global society wouldn’t have matured this rapidly, as the mail has connected civilisations and allowed thoughts to be communicated across the globe.

Thanks to the Royal Mail Heritage website, my research was easier than expected. So here are a few chronological historical facts that really impressed me and most probably you never knew about the Royal Mail either.

1. The First Master of the Posts 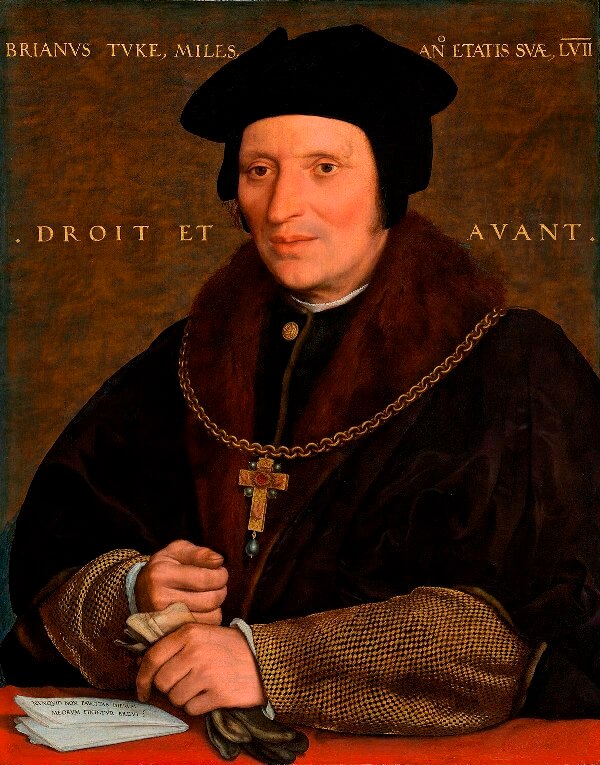 Everything started in 1516 when Henry VIII knighted the very first Master of the Posts, Sir Brian Tuke. He was running the King’s Posts and his new status gave him the influence and authority to establish key post towns across the country and build a formal postal network.  From this date it took 119 years until the first public postal service was opened.

1635 was the year that the postal service opened to the public for the first time. It was a really slow process and the system remained unchanged for almost 150 years. In that time letters were delivered by mounted post-boys and delivered to the local postmaster. 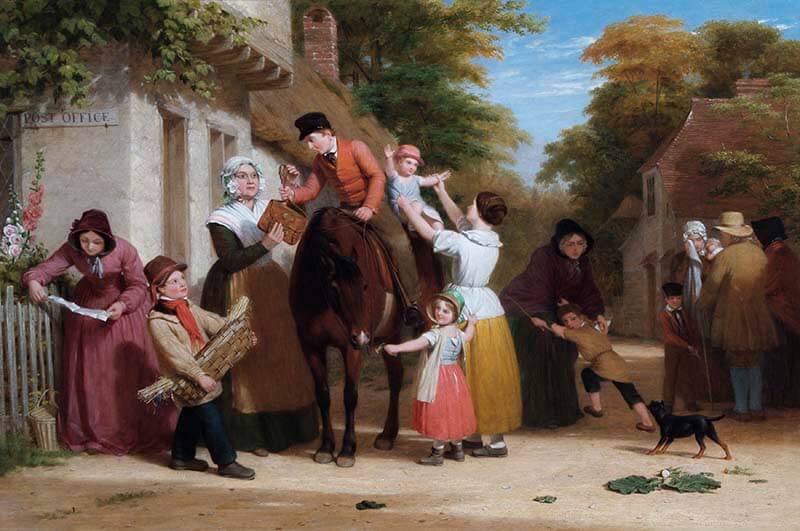 3. The first coach journey thanks to John Palmer (a theater owner from Bath)

John Palmer was a theater owner who organized a rapid carriage service to transport actors and props between theaters and he believed that something like this would be a benefit for the postal service. 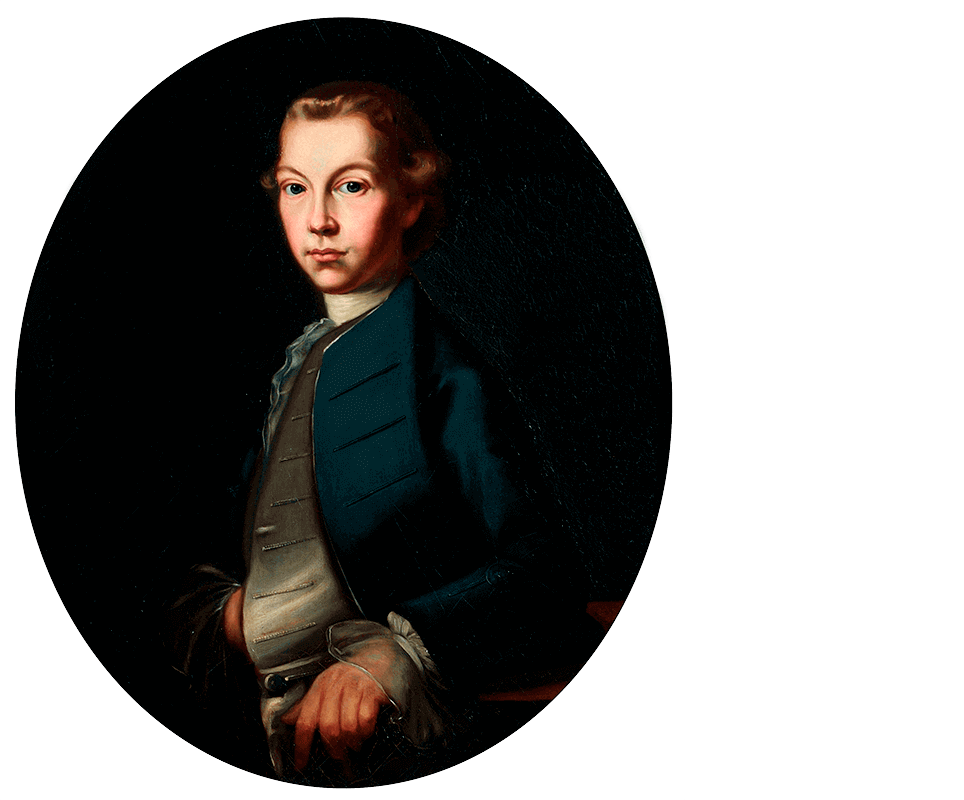 John Palmer,Organiser of the Mail Coach System, Surveyor and Controller General of the Mails, 1789-1792

Within a year from the introduction of the first mail coach several routes were opened, reducing the journey times by two thirds. 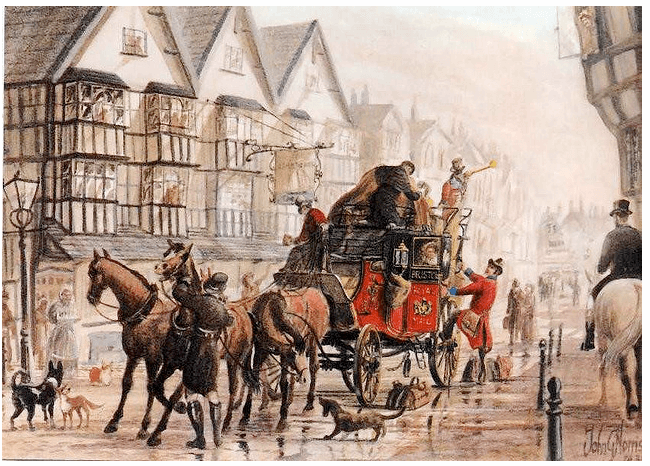 In 1821 the introduction of two steam-driven boats marked a new era in the postal service. They were called Meteor and Lightning. Soon more of these boats were introduced, but due to the very expensive manufacturing costs and the difficulty in operating them, they led to a great financial loss in the 1830s. 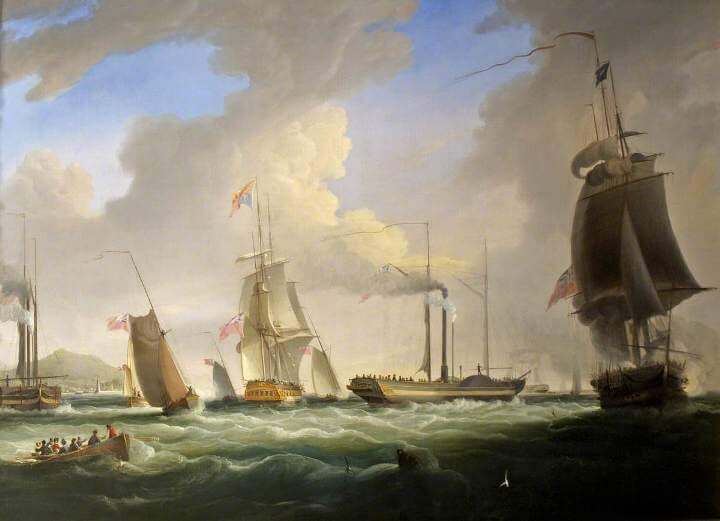 Moses James Nobbs served from 1836 to 1891 being the longest serving mail guard in the Post Office in a total of 55 years. The guards were the only Post Office employee aboard the mail coach. They were heavily armed, carrying 2 pistols and a blunderbuss. 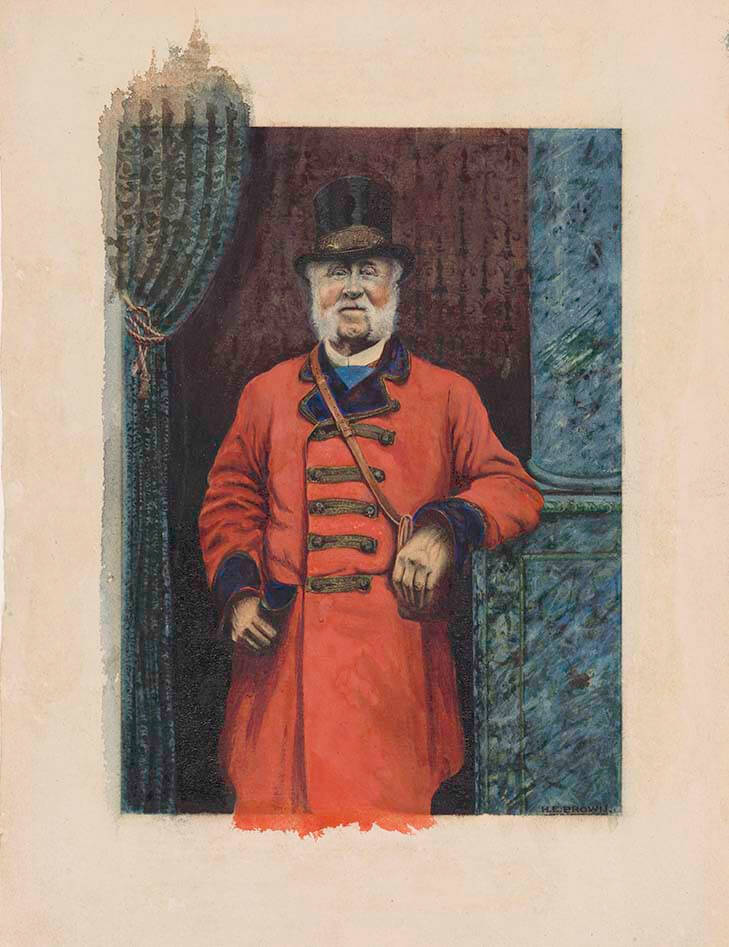 The guards had the first official uniform. They also had timepiece, to keep pace with the differences in local time, and recorded the arrival and departure times of the coach at each stage of the journey. In the towns and villages that the coach was not due to stop, the guard would throw out the bags of letter to the Letter Receiver or Postmaster, and at the same time he would snatch the outgoing bag of mail.

On 20th of January 1838 the first Traveling Post Office was born and staff worked in a converted horsebox to sort mail on the Grand Junction Railway, between Birmingham and Warrington, growing to more than fifty separate routes.

MAIL VANS are speciallydesigned to deliver and pick up the postal bags when the train is travelling athigh speed.

In 1837 Rowland Hill made a revolutionary suggestion to establish a very low uniform postage rate for letters regardless of distance carried and the payment of the letter by the sender using a prepaid stamp. He wrote: “A bit of paper just large enough to bear the stamp and covered at the back with a glutinous wash which the user might, by applying a little moisture, attach to the back of the letter”. 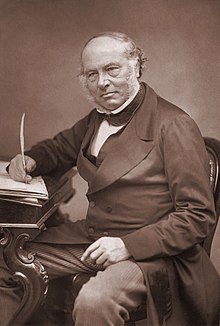 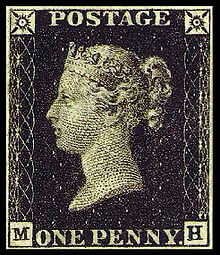 On 6th of May the world’s first adhesive stamp – Penny Black – was introduced. 68 million stamps were used in the first year. Penny Black was replaced with Penny Red in February 1841.

In 1843 Sir Henry Cole, founding director of the Victoria and Albert Museum, was in that time a senior civil servant (Government worker) who worked as an Assistant Keeper at the Post Office. Wondering how he could make more ordinary people use the postal service, he came up with the idea of a Christmas card. Him and his artist friend John Callcott Horsley RA designed the world’s first Christmas card and they printed about 1000 pieces and sold them for 1 shilling each (that is only 5p today). 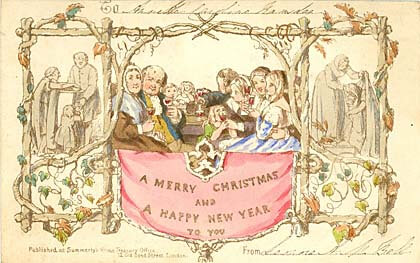 The first four British pillar boxes were introduced as an experiment on 23rd November 1852 on the Island of Jersey. These red-painted hexagonal boxes became really popular that within a year the first pillar boxes were installed on Mainland Britain, but these ones were dark green. In 1874 all letter boxes were painted bright red to increase their visibility. 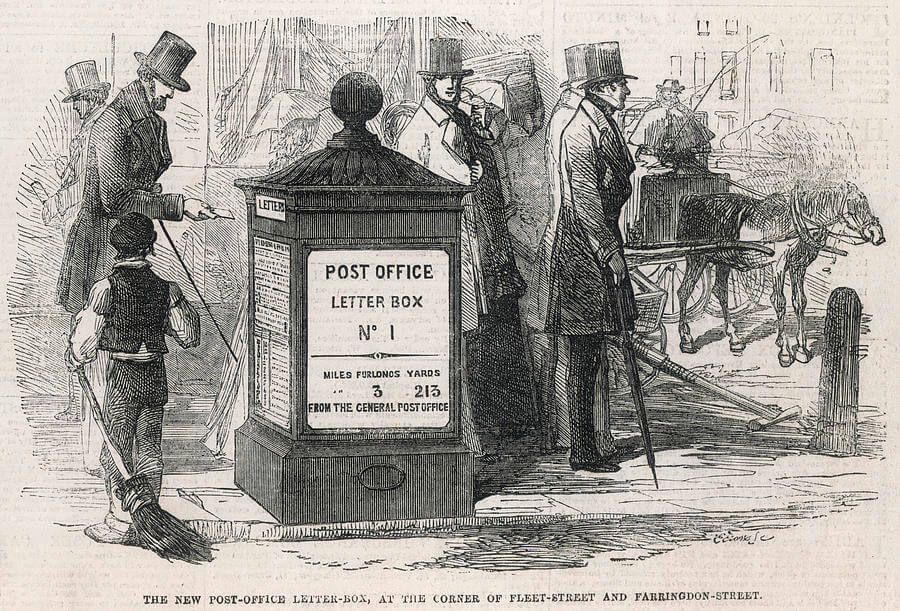 In September 1868 cats were officially appointed to catch rats and mice. Three cats worked on probation at the Money Order Office in London, with a weekly wage of one shilling. They had to rely on mice for the rest of their food. 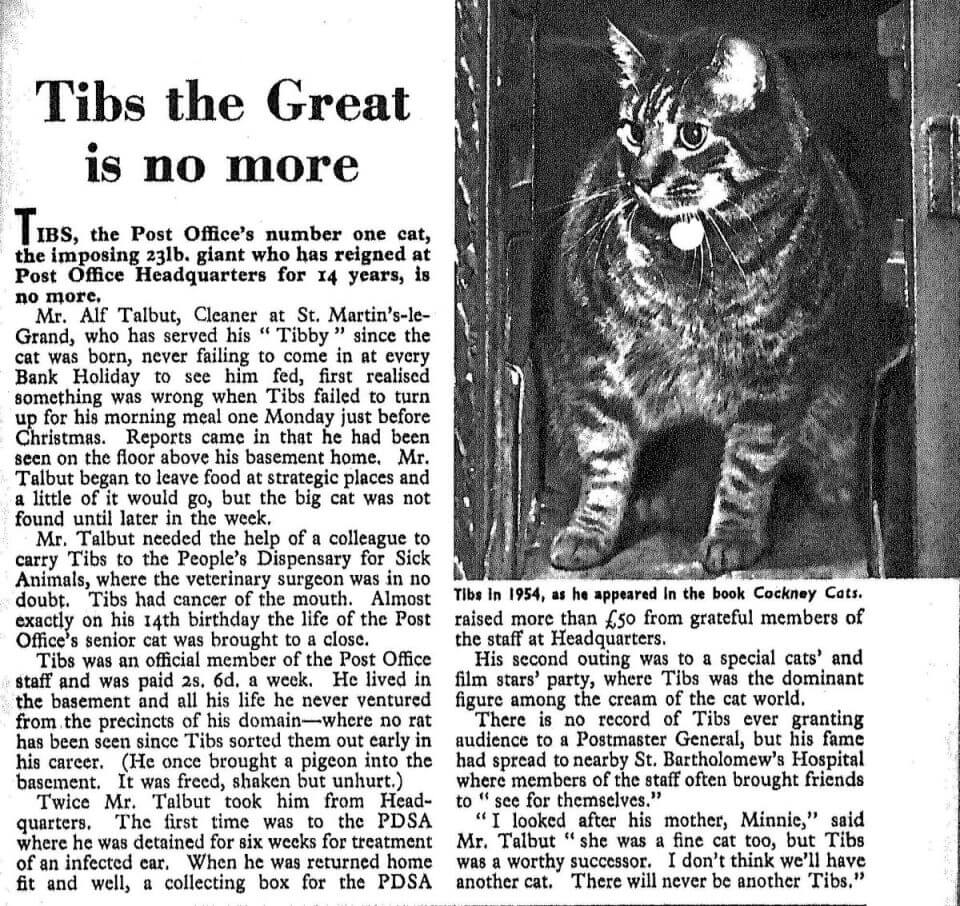 The cats have done their duty very efficiently, so they were rewarded an increase of 6p weekly. The official use of cats to control rats and mice spread to other Post Offices. Three of the most famous post cats include Minnie, Blackie and Tibs.

In 1870 the Post Office launched its telegraph service. The sender would go to the Post Office with their message. There they would change it into Morse code and send it over wires to another Post Office where it would be written down and then the written message would be delivered. Compared to traditional letters, this was a much quicker way of communication. 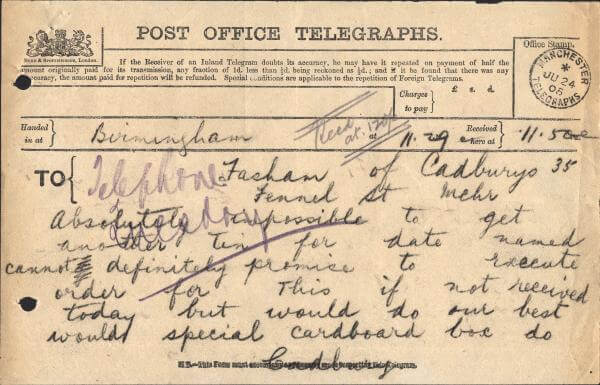 12. The most distinguished Postmaster General was blind

Between 1880-1884 Henry Fawcett was by far the most distinguished Postmaster General of the pre-modern era. He was almost 47 at the time of his appointment and he had been a Professor of Political Economy at Cambridge since 1863. He lost sight in both eyes as result of a shooting accident when he was 25. 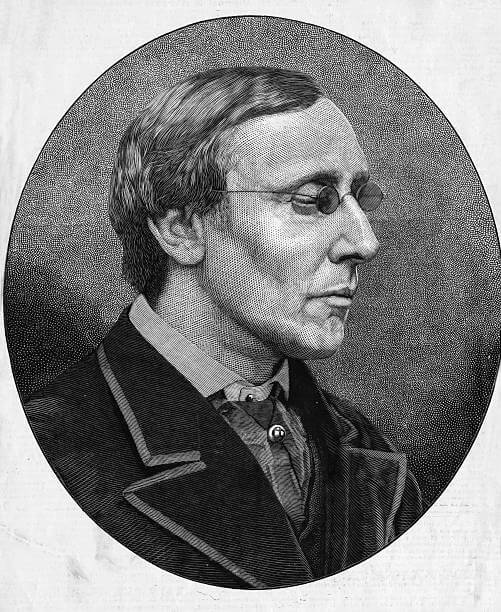 His labour reforms and support for women in the workplace was characterised a progressive era that many at the time saw as a golden age. He objected to the barriers placed in front of women. He met with worker’s delegation and produced a series of detailed labour reforms known afterwards as Fawcett’s scheme. Pay scales for the telegraphy workers and letter sorters were significantly improved.

In 1901 the Association of Post Office Women Clerks was founded and it represented female clerical workers, fighting for their employment rights and ultimately for equality with men.

Here are a few remarkable women that left their mark in the history.

Elizabeth Dickson served the post office for 30 years as a postwoman and when she retired in 1908, it was reported that she had never once been late for duty and had trekked an estimated 130.000 miles during her career, the equivalent of walking 5 times around the world. 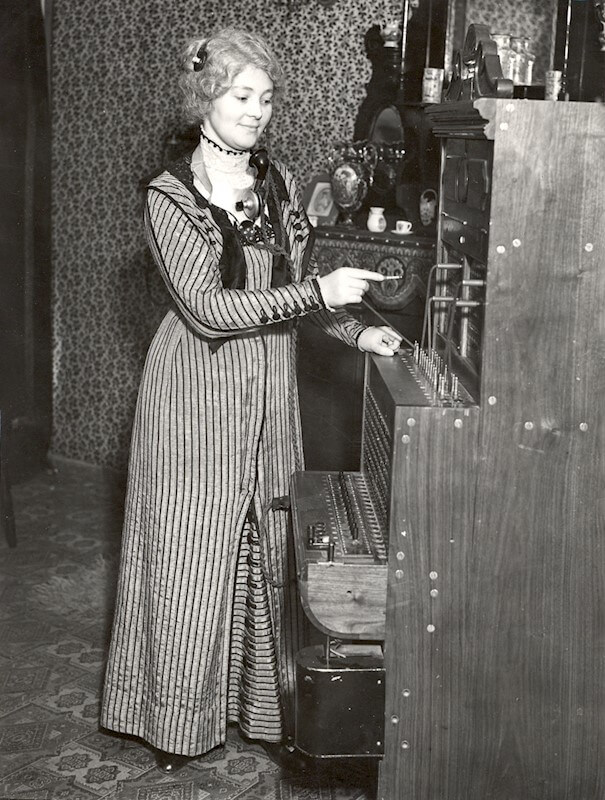 Annie Cooper was one of the longest serving Sub-Postmistress completing 50 years of service on her 70th birthday.

Fanny King was a traditional rural postwoman who, at the age of 65, was still trekking her 9 miles route on foot every morning and was quoted as saying: “I think I should die if I didn’t have my morning delivery.”

The RMS stands for Royal Mail Ship, indicating that the Titanic was contracted to carry mail. The Post Office and Mail Room were deep in the ship on decks F and G. The five postal workers were sorting the mail brought on board of the ship in a total of 3.364 bags, as well as dealing with letters posted on the ship by passengers and crew. 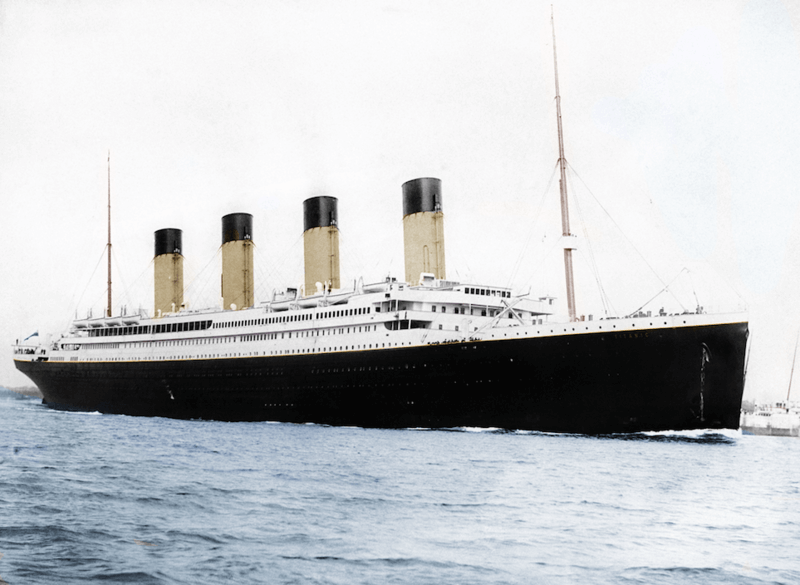 When the ship struck the iceberg, the postal workers were celebrating their colleague’s 44th birthday. As soon as they realized that the Mail Room was flooding, they attempted to move 200 bags of registered mail to the upper decks in the hope of saving them. One of the ship’s stewards recalled: “I urged them to leave their work. They shook their heads and continued at their work. It might have been an inrush of water later that cut their escape, or it might have been the explosion. I saw them no more.” They all died doing their duty.

15. Letter writing in the great war

“Letter writing had become practically a lost art until the yearning of the men in the trenches for the precious letters from home revived it.” The Sphere reported in November 1915. 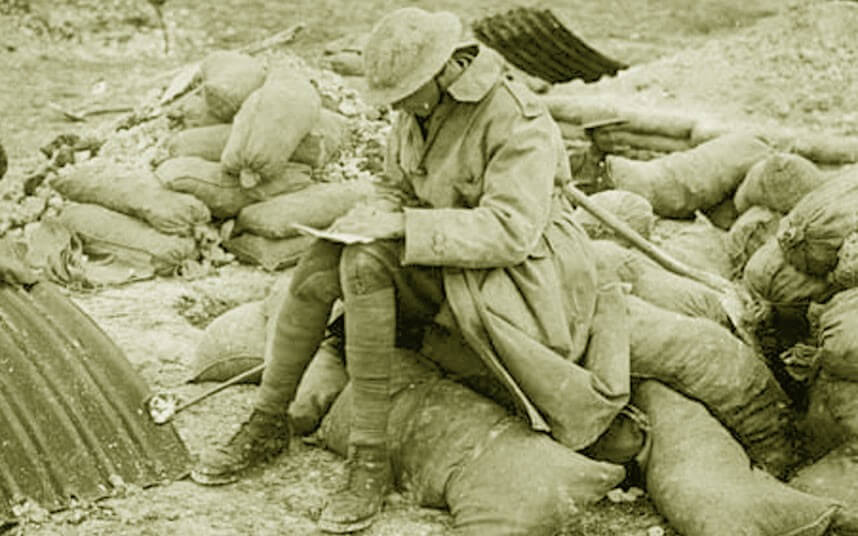 Letters from home ranked with food, leave and reliable clothing, as the least dispensable features in a soldier’s life during the war. It is said that no infantryman in the trenches ever ate before reading the letter, when received at an evening meal. That is why the Postal Services never rested during war time.

16. Postal service during the war

The Post Office was often described as a pioneer in the employment of women, recording 60.659 women in the workforce between 1913-1914. 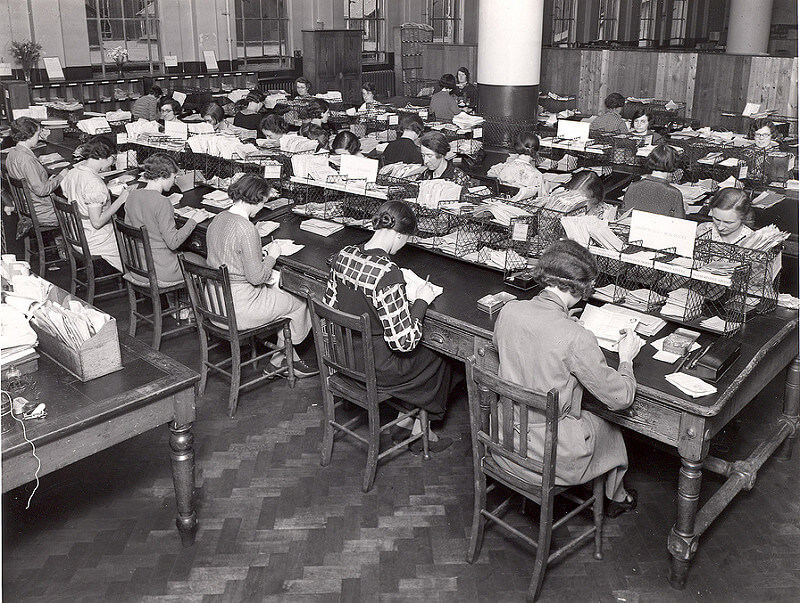 Works goes on as the bombs fall. Hundreds of telegrams were handed in and the Post Office had the responsibility of handing these messages and to remain unmoved by the urgency of their appeal. In August 1940 one girl who was off duty at 8pm reported back at 9pm with a request to sleep at the office as her home has been demolished by a shell that evening. She was back on duty the next morning.

The Post Office underground railway was running from east to west beneath London, parcels travelled 70 feet below ground and during Great War tunnels were used to store artwork. Today this railway is open for tourists. 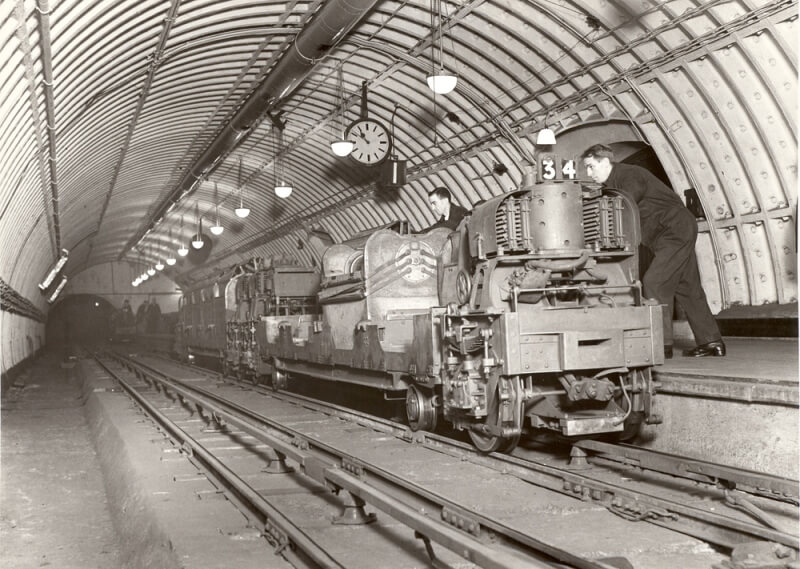 In June 1934 the first experimental flight carrying mail by rocket was made over the Sussex.

After the first successful experiment with more than 1.000 letters, other 2 trials took place, unfortunately they were unsuccessful and the experiment was soon abandoned. 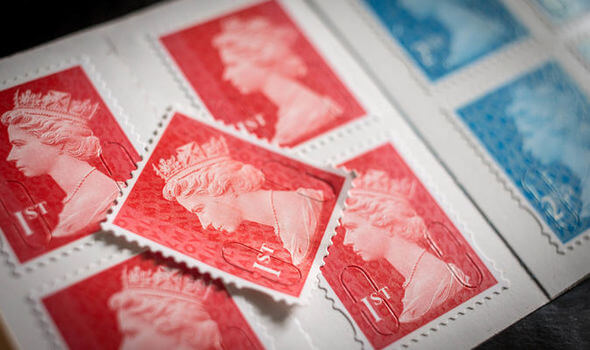 The British Post Office was the first in the world to introduce the first and second class letter service.

If you want to find out more, you can feel the history with your own eyes if you visit The Postal Museum in London. Their collections of the past include photographs, films, art, vehicles, letterboxes and many more waiting to be discovered. I added their details and address below. This is not a sponsored post, this is just my recommendation of having a glimpse of the past in this historical city.

Now that we took a quick journey "back in time", I am really curious to see your opinion on how the Postal service influenced our social development and still influences our reality, mostly based on online shopping, no matter where you are in the world.

Get exclusive deals you will not find anywhere else straight to your inbox!

Get social with us :)